A Reusable Bottle at a Sustainable Price, By Stephen Larkin as part of Bank of Irelands Think Business Campaign A reusable water bottle at a sustainable price

This post was proudly sponsored by Bank of Ireland

As we become more environmentally aware, one trend that has emerged and reached an all-time high is the demand for reusable water bottles.

Bottles come in different sizes and can cost anything from €10 to €50, but one Irish company might offer the best value for money.

The company’s mission is to make the healthy and sustainable option affordable in Ireland, while also motivating people to take their first steps on their sustainable journey.

Cathal, who played football several times a week, found his car was constantly filling up with empty plastic water bottles after training and decided enough was enough, and wanted to make a change.

“At the time I didn’t fully understand the implications of using plastic water bottles and I wasn’t thinking about the impact it had on the environment.

“I went out to buy a reusable water bottle and found that they were quite expensive, and I knew people wouldn’t be able to afford them, so I wanted to make them more affordable,” said Cathal. 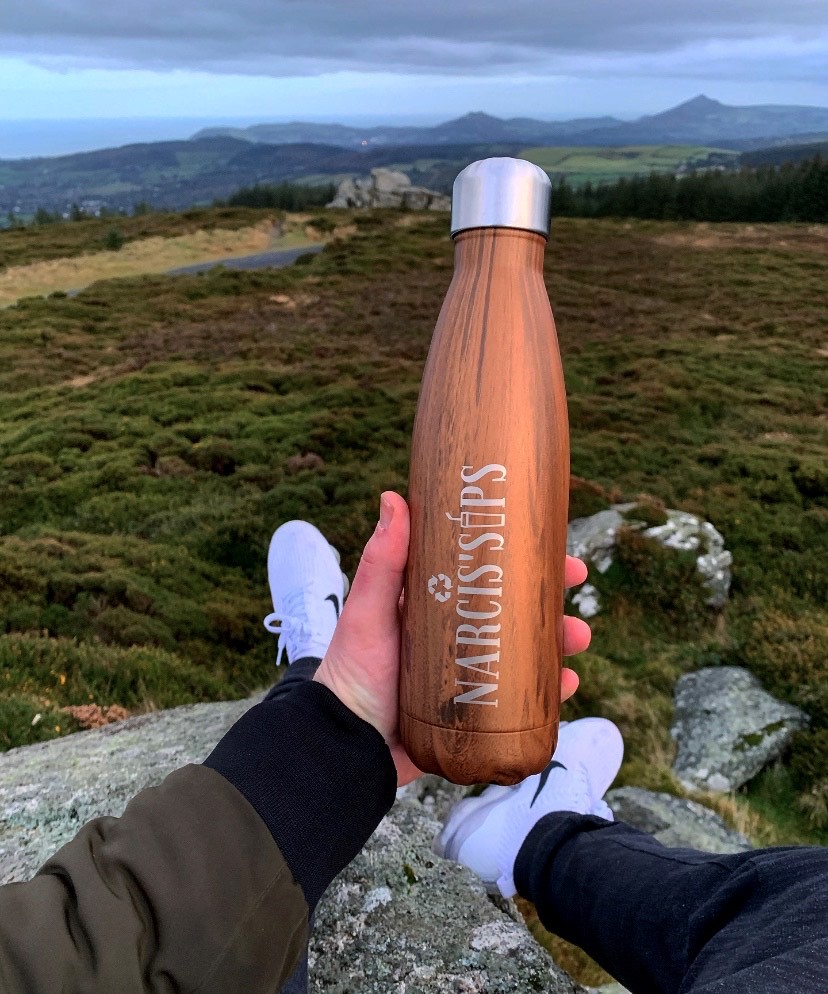 After four months of deliberation, Cathal decided he was going to start the business and invest his savings into 100 bottles, believing it would take a year to sell the lot. However, Cathal was in for a major shock.

“I thought it would take time to shift the lot,” he says. “But it was quite the opposite. The bottles were gone in six weeks and I couldn’t believe it.

“A lot of my friends lived in Dublin, and I didn’t want them spending their hard earned money on postage, so I spent most of my lunch breaks cycling around the city delivering them. It was actually a great decision, because it meant I got to meet new people and I was reducing my carbon footprint,” he added.

“I wanted to make them (water bottles) more affordable”

Narcis’sips also donates a percentage of every sale to charity, something that Cathal feels passionate about.

“One of my favourite words is perspective. I used to spend €30 a month on coffee, and then I learned that if I give €25 each month, it can provide two families in Africa with access to clean water or it can put six kids through school for a year. It was such an eye-opener and we really do take things for granted,” added Cathal.

As for the business itself, Cathal remains undecided on where he wants to go with the Narcis’sips, but says he is enjoying being able to showcase his personality in the business.

“From a young age, I had always had my head set on being an accountant and working with big companies, so going into business full-time wasn’t really something I ever thought about.

“I still tell my friends now that this is just a hobby on the side, so I don’t think it’s something I’ll pursue full-time to be honest, but you never know,” he concluded.

Looking at the short-term future, Cathal is hoping to work with schools and businesses and get more children and office workers doing their part to protect the environment.

To order your own Narcis’sips water bottle, click here.

We all know that single-use plastic is detrimental to the environment, some to a greater degree than others perhaps. However, in Ireland, avoiding using single-use plastics can be challenging at best, not to mention expensive. Nonetheless, the tides are slowly turning and one Irish company playing a part in this movement is Narcis’sips, a company offering affordable reusable cups and bottles founded in 2018 by Cathal O’Reilly. Plastics, an Introduction & why Irish brand Narcissips are here to help!

Narcissips Irish Reusables provides an Intro to plastics over the years from its initial conception, many uses in today's modern world that we can't live without, to it's demonisation and how ultimately, the people are the problem with our poor choices and habits!

By writing this piece, I hope to highlight that plastic isn't always the problem in an attempt to raise awareness of how we, the people, need to choose reusable bottles and live more consciously to improve the plastic problem in Ireland and across the world.

Many thanks, Cathal O'Reilly