Some of the Dirty not so Sustainable secrets behind Electric cars!

Electric Vehicles - sound great, look great and appear to be a wonderful solution to some of the climate problems we face in today's era of consumerism, indulgence & emissions!

However, all may not be what it seems and when it comes to EV's, we really need to pop the bonnet and look under the hood to fully critique.

To introduce this brief summary document, there are a number of issues & areas I am going to highlight, which are not normally discussed in the media/marketing driven side of the news we see.

The more I read & learn about sustainability and often the world as a still somewhat clueless 20 something year old, I am continually telling myself - 'don't take this at face value', 'what are they not discussing', or 'who does this benefit or is this a biased piece?'...

Before we consider buying an electric car, or any item for that matter - we need to ask ourselves, 'Do I really need this?' - as usually, the most sustainable thing is what we already have.

Electric Vehicles have been sold and marketed as "Emissions Free' across all media platforms.

However, if they were aptly named - it would be 'Tailpipe Emissions Free' as there are a huge amount of emissions associated with the mining, manufacturing & transport of these EV's from source to owner.

The first issue with electric cars are at the production level with the batteries. These batteries rely heavily on the extremely Carbon intense mining industry to source the minerals required which lead to a massive carbon footprint being generated up-front pre-purchase.

On the other side of the battery, at a consumer level, we also need to consider the emissions generated at the charging point. Depending on where the EV is charged, emissions may be generated depending on the countries energy profile or energy mix. For example, charging an EV in Australia, Ireland & the United States would all lead to various differences due to the countries focus on coal, oil & renewables. 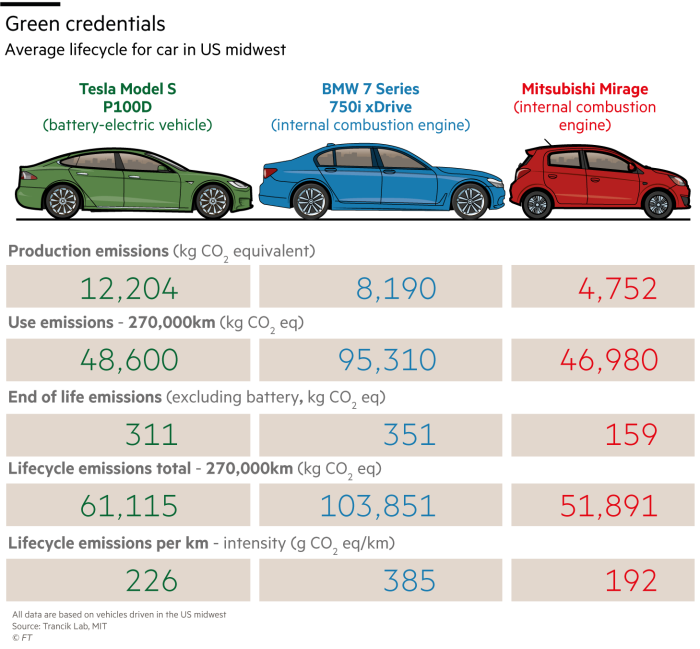 2) Are you going to do enough driving to warrant the purchase?

As with most things, we need to ensure we "offset" the carbon we generate to actually create benefits!

If you already have a normal petrol / diesel vehicle that you already own and on only occasionally use - you are better off driving that into the ground. Otherwise we wouldn't be essentially 'offsetting' or 'warranting' the additional emissions associated with the new car (or any purchase for that matter e.g. IPhone)

University of Liege researcher Damien Ernst said in 2019 that the breakeven point of EV's being more sustainable than petrol cars is between the 67,000km and 151,000km mark - which with the average person driving 10-15,000km per year would lead us to believe we must hold onto these EV's for several years at a time according to various Reuters reports.

For me, the best option living in Dublin was selling my car & choosing public transport / cycling as much as possible. However, I will caveat that and say I was extremely lucky to live within walking & cycling distance to all local amenities whilst also having a strong liking towards cycling in general - which may not be the case for others.

3) The Mining Issue (out of sight, shouldn't mean, out of mind)

The next issue with the batteries are the mining activities involved in procuring the minerals such as Cobolt & Lithium which are required to charge all of our batteries (including our Phones & Laptops) across the developing world which include;

70% of the worlds Cobolt comes from the DRC (Democratic Republic of Congo) where mothers and fathers cannot afford to send their children to school, in order for them to try mine for Cobolt. According to Amnesty International, up to 40,000 children from the age of 6 are involved.

Not only is it horrendous to think of the child labour practices we must also consider that the mining alone is awful as the workers rarely have footwear, let alone PPE which has led to a variety of health related problems.

In tandem to a lack of PPE, the mines that these workers source the minerals in are also known to be generally unsafe with poor tunnel infrastructure which led to 47 deaths in one instance alone in 2019 at a Glencore Site.

Numerous big-tech companies are all linked to both Cobolt and the DRC including Apple, Alphabet (Google’s parent company), Dell, Microsoft, and Tesla which also were cited in a lawsuit over deaths and serious injuries sustained among child laborers in DRC cobalt mines. Tesla on another hand, is currently moving away from Cobolt-led batteries.

One interesting conundrum is that Cobolt is both a crucial component in solving the global renewable energy problem for the western world, yet something which is also leading to an instant increase in emissions at source.

This essentially means that the underdeveloped are put under the climate change precipice again due to the developed world with huge quantities of No2 and Co2 released across the mining supply-chain, without mentioning the other environmental issues caused with water & air pollution.

This also leads to the ponder on the accounting equation of emissions - how do we account for emissions e.g. at source or by requirement? The other issue I see that wasn't highlighted then is the cost of Electric cars.

With the minimum price I have seen being approx €30,000, it seems only the well-off can afford to change.

Of those that can afford to change and purchase electric vehicles, are they likely to hold onto the EV for the necessary time period required to obtain the actual environmental benefits by offsetting the CO2 from production? Or are the more likely to continue to up-grade at any chance.

While recycling is always at the forefront of 'sustainability' related solutions, it shouldn't be the first 'R' that comes to mind.

In terms of options, it's 'refuse first, then reduce, then repurpose and lastly, recycle'.

At the moment (similar to most plastic recycling issues) it's estimated that approx 5% of EV Batteries got recycled in 2020 according to Dr Anderson of Birmingham University & the BBC meaning all those deaths, pay, health & social issues to get the batteries to your EV - have led to little value at all.

Obviously there is huge investment & hope being placed into the battery recycling industry for the future so it can only improve (hopefully) - but only time will tell. I'm finding it very difficult these days to sort between the green & clean and the pretenders...Marketing & falsehoods are very easily pulled over our eyes and from the variety of studies I read for this article & there always seemed to be something left out or to consider.

For example, when discussing normal vehicles, various studies did not consider the fossil fuels themselves and purely just focused on the engines emissions whereas in comparison, for the EV's, they considered both manufacturing & charging processes - which seemed bias.

Lastly, in terms of emissions - we need to broaden our lens.

Emissions are not the only issue in the world right now.

There are still a variety of other benefits that EV's bring ranging from less air pollution to less noise pollution & as time goes on and the world does move towards renewables/nuclear, only then will the real benefits come to fruition.

But for me, the mining issues are horrendous, with regulated and non-regulated mines leading to deaths, child labour issues, pay issues and general health issues which at the moment, wouldn't warrant my support.

Also, it seems tyrannical that in 2021 writing this - we don't realise that the solutions for the western world, are still putting the eastern & southern underdeveloped worlds at risk.

It seems the rich get richer & cleaner, while the poor get poorer & struggle with climate-change related issues that the western world has created.

Lastly, public transport is under-rated & should be utilised and pushed more across all cities!

We need to ask ourselves the below;

(1) how much driving do you actually do?

(3) have I considered the full lifecycle of the car! Petrol = use / EV = Production

(4) can I recycle the battery or is it likely that I will need to?

(5) can I use public transport more in my day-today? The history and evolution of sustainability as a concept and movement can be traced back to the early days of human civilisation. In ancient times... The Single-Use Coffee Tax / Coffee 'Levy' - All you need to know!

The governments proposed single-use cup tax / coffee 'levy' is due to be introduced in December 2022, with measures to help ease retailers transition into the new process. Here is a comprehensive guide of the Tax, the potential benefits, some insights into the similar plastic bag tax & some issues to consider from the point of view of the retailer!